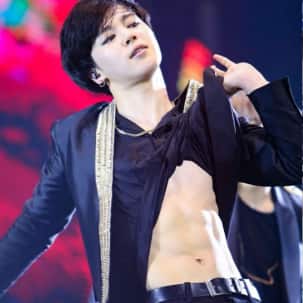 The K-Pop super band BTS is among the few names in the world of music today which have evoked global recognition. After making their debut in 2013, the band has garnered a following of 30.1 million on Twitter and 42.6 million on Instagram. They have smashed their own record with their latest track Butter, which garnered 10 million views on YouTube in just 13 minutes upon release. But apart from their commercial success, the BTS members are also known for connecting with their fans by keeping them updated with their personal stuffs as well. Also Read – Trending Entertainment News Today – Indian Idol 12: Once again Shanmukhapriya faces criticism from fans for ruining Priyanka Chopra’s song Darling, ARMY feels lip-piercing has made BTS’ Jimin HOTTER than before

As we all know that the BTS members spend a lot of time together creating music and have lots of fun in the making. They always tease each other and Jimin is one member who gets teased quite often. And the other BTS members make sure they do it right. Also Read – BTS: Here’s all you need to know about the new episodes of Run BTS

So Jimin has this weird habit of being late and during an episode of Bon Voyage, the BTS members decided to teach him a lesson. They asked their car’s driver to start driving away the momen they saw Jimin approaching the car. Also Read – BTS: Did you know the band members had thought of THESE names for their fans apart from ARMY?

During the 2015 BTS Festa, V had spoken about Jimin’s shower habits and said that Jimin tends to leave his bags and bandannas on the floor after using them.

Jimin also has this habit of often sweeping his hair with his fingers. Jungkook once imitated him and took it a notch higher.

Jimin is also known for complaining during the games and Suga knows it. In episode 86 of Run BTS, Suga imitated Jimin showing everyone how the latter would act in the next game.

The all-boy group from South Korea, known to belt out universally bestselling dance hits with awe-inspiring synchronisation in their movement in MVs like, Fire, Not Today, Dope, Mic Drop, recently said that it would be a toss-up between their 2018 song Idol and last year’s ON when it comes to selecting their hardest number. But then, the BTS members RM, Jin, Suga, J-Hope, Jimin, V, and Jungkook told IANS “the harder the job, the greater the satisfaction”.

Jimin, who is the lead vocalist and foremost in the dance line, said, “When it comes to the level of difficulty, it’s definitely ON. We haven’t performed the song in front of our fans in person, so I really want to show them.”

Right now, as their new single Butter continues to break records, BTS, or Bangtan Sonyeondan, are touching the skies of massive success as no other group has done in recent times anywhere in the world, riding a wave few musicians have done in the history of popular music.