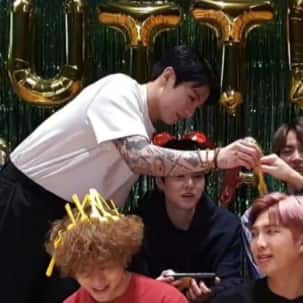 BTS is setting new records with Butter. The septet’s new song crossed 113 million views in 24 hours. This is a new record for the boy band. The excitement in the ARMY was huge after they announced that a new single is coming on May 21, 2021. People are loving the song. When it comes to BTS one thing that is synonymous is style. The boys flaunt luxury designer wear, chic accessories and hair. Yes, the boys love to colour their mane. From Jimin’s rainbow hair to JHope’s blonde locks and Jungkook’s royal purple look, fans went crazy. In the video, we could see Jungkook with long hair with a streak of purple. It looked sexy but he felt otherwise. Also Read – BTS: Did you know RM aka Kim Namjoon had run away 6 months before his debut? – THIS person convinced him

For the press conference, we could see that he sported really short hair and it was again dyed black. Fans were reminded of the Jungkook who made his debut in 2013 with the boy band. Now, some pics from the celebration party of Butter have gone viral. Girls are gushing over his tattoos. We can see that he has got a full sleeve with some beautiful designs. His half-sleeved white tee gives fans a teasing glimpse of the tattoo. Check out the fans’ reaction… Also Read – BTS members RM and Suga REVEAL their favourite characters from FRIENDS

his arm is full of tattoos wow I wanted to see each one so badly 🙁 pic.twitter.com/IADgSL0K3F

Oh @googiefolder & @shadowgoogie I’m telling ya I’m so very glad to be able to see Jks arm with his amazing tattoos I call them art work . His Tattoos are done Amazingly. I’m glad that they decided to let him show them. ??????. And Taes Hair looks so good on him ??

I know, I’m too late to talk about this, but… #jungkooktattoos are driving me CRAZY!!!
And Look how Confident he is wearing that T-Shirt!!!
Please wear a Sleeveless next time Sir #JUNGKOOK !!!
I would love to See that!!! https://t.co/UGKb3CYzwZ

Jungkook is called the Golden Maknae as his talents are versatile. What he touches turns into gold. Well, the young man is winning hearts and how! Also Read – BTS: The septet hopes to win a GRAMMY with BUTTER, and we say it’s now high time they do!