Just 4 nervous fanboy moments of BTS members with Usher, Ariana Grande and others to make you fall in love with the Bangtan boys all over again 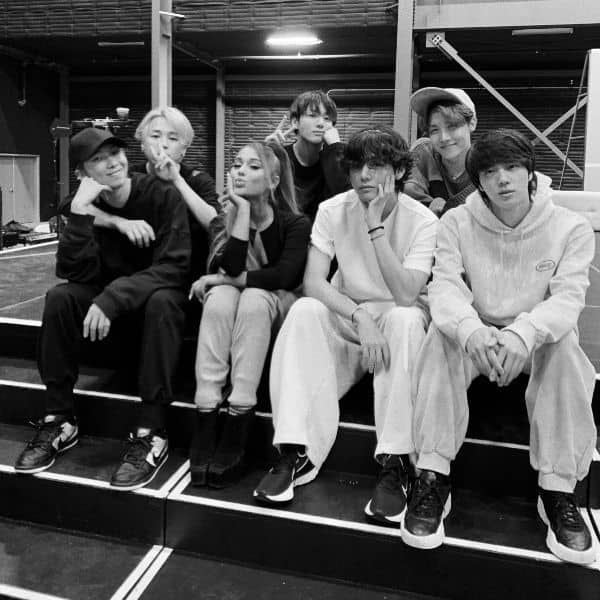 There are only a few names in the world of music that evoke global recognition as the K-Pop super band BTS in today’s time. BTS, or Bangtan Sonyeondan, are a septet comprising Jin, Suga, J-Hope, RM, Jimin, V, and Jungkook. And like any celebrities, they have a name for their fans, too. They call their fan base, ARMY, who have often shared their fanboy moments with the BTS members on social media. But there were a few times when the Bangtan Boys had their nervous fanboy moments with their favourite stars such as Usher, Ariana Grande among others. Also Read – Ariana Grande shares intimate wedding pictures with husband Dalton Gomez – view inside pics

During their appearance on MBC Radio‘s Bae Cheol Soo’s Music Camp, RM had revealed that rapper Nas is the biggest musical influences for him. And when RM shared that he met Nas at the Grammys 2020, the other BTS members went on to reveal how nervous RM was and that he couldn’t even talk properly. Also Read – BTS wins BIG at Billboard Music Awards 2021 ahead of the main show; here’s how V, Suga, Jungkook, Jin, Jimin, RM, J-Hope reacted

Suga also shared that rapper T.I. has influenced him the most. He revealed that they were even going to work together on a remix. But unfortunately, things didn’t go as planned due to their tight schedule. “Actually, I was going to work on a remix with [T.I.], but I couldn’t. He was going to [be a part of] my mixtape, but the timing didn’t work out,” he said. Also Read – From V’s acting plans to J-Hope’s plans for the second mixtape: Here’s some interesting new REVEALS about BTS we bet you didn’t know

BTS recently gave a loud shoutout to American singer Usher in their latest single Butter. V sang the lines, “Smooth like butter, pull you in like no other. Don’t need no Usher, to remind me you’ve got it bad.” BTS boys were star-struck and had fan moments. They even mentioned that they are still fanboys at heart. Usher had shared a TikTok video wherein he was seen singing the tune of BTS’s latest hit.

And we all know how Jungkook enjoyed his fanboy moment with Ariana Grande when he had attended her concert and clicked a picture with her. He recently revealed that Ariana inspires him. “I was really impressed by her stage presence. She’s a very small person, and the volume of her singing and what she was able to do was really moving, really impressive,” he said.

Right now, as their new single Butter continues to break records, BTS members are touching the skies of massive success as no other group has done in recent times anywhere in the world, riding a wave few musicians have done in the history of popular music.